The increasing use of AI in job interviews

Chances are that your next job interview will be with … a robot. The adoption of AI applications for recruiting is on the rise, as companies look for more effective ways to save time and reduce human bias while searching for the best talents.

An emerging crop of new, “smart” hiring tools are helping them to do just that, and they are successfully cutting down interview processes from what traditionally took weeks to a matter of a few days.

In 2017, a Deloitte report found 33 percent of survey respondents already used some form of A.I. for recruiting and the trend keeps growing fast, especially in the U.S.

Applicants seem to be quite happy with that, as well. According to a study from recruitment firm Randstad, 91 percent of U.S. job candidates said they believed technology, AI included, has made applying for jobs more efficient. They also said they felt more respected and engaged in the recruitment process after receiving automated updates.

Used by huge companies such as Unilever or Hilton International, among many others, HireVue is a predictive AI application that screens job candidates on around 25,000 different data points, breaking down their words, voice, and facial expressions. These data are collected during a video interview where applicants have to answer between five to seven questions. Then, they are used to determine if a person would be a friendly and empathetic worker, and ultimately successful in the role.

As reported by Fast Company, HireVue’s Chief Technology Officer said one of the main goal of the platform has always been to remove bias: Through providing a larger behavioral data set than any human recruiter could amass on his or her own, it aims to take personal prejudice out of the equation. That seems to work: Unilever has improved the diversity of its talent pool by 16 percent since using the tool.

At Hilton International, the HireVue interview is actually the last step of an entirely automatized process: first, an applicant tracking system searches people’s resumes for keywords matching the job description. Next, a chatbot asks them a series of yes or no questions to make sure they meet requirements (for example, it could ask “Do you have internet access for work-from-home positions?”). If the candidates answer yes to all the questions, they get interviewed by HireVue.

But this is definitely not the only AI tool which is use to “empower” job interview. For example Mya ( short for “my assistant”) is a bot that directly engage with candidates via text, asking them basic questions such as start date and salary requirement. Candidates can ask Mya questions, as well: if it can’t answer, it put the persons in contact with a human recruiter. It is possible that they don’t even notice the difference: 73 percent of surveyed candidates who had interacted with Mya thought they had spoken with a person and not with a bot.

The best thing is that 100% of candidates get a response.

Talvista (formerly Talent Sonar), a California-based start-up, aims to eliminate bias from job descriptions by using A.I. to make language more inclusive and appealing to women and minority applicants.To do it, they used thousands of surveys to figure out prevalent associations with words and recommend alternatives. Laura Mather, co-founder of the company, said: “From birth our brains are forming neural pathways that relate every word to the various images that are associated with that word”

And she continued: “For example, the word “competitive” is often associated with a picture of a sports team (usually male, often white), so the brain makes a connection between the word and the picture. This means that when non-male/white candidates see that word in a job description, they will subconsciously not imagine themselves in the image the company is presenting, and be less likely to apply.” The goal of Talvista is to avoid just that.

Recruiting platform Triplebyte, which works on behalf of tech giants like Evernote, Dropbox, Adobe and more, uses artificial intelligence programs to test and perform initial online interviews with software engineers, who are then matched up with positions most relevant to their skills. This should help attracting a more diverse pool of candidates than the one chosen by human recruiters. 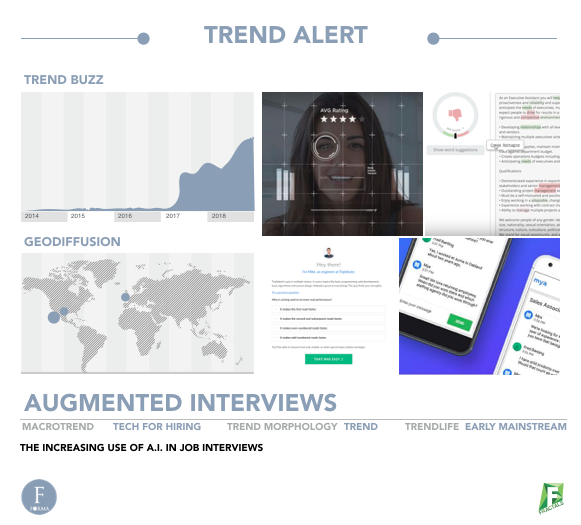 Have you spotted another evidence of this growing trend? Let us know! You can write us at info@fractals.it and get the chance to be a part of our network of researchers!