Wine sold in cans as a more accessible and affordable option that doesn’t affect quality. Following the success of canned craft beers, it’s marketed to non-regular wine drinkers and it’s ideal for the on-the-go consumption.

They call it “the beerification of wine” and it’s becoming a huge trend in the U.S.

To tell the truth, the idea of putting wine in cans seems to come from Australia, where Barokes Wines was probably the first to experiment with it back in 1996. Many years after, in 2004, the Francis Ford Coppola Winery launched their Sofia Blanc de Blanc minis, pioneering the practice in America. But it was only in 2015 that the trend really started to explode, and it was mainly thanks to the Oregon-based wine producer Union Wine Co.  Having launched nearly a decade earlier, they were looking to rebrand themselves by creating a product that would be more attractive to young consumers who were not regular wine drinkers, and also more suitable for the on-the-go consumption. Craft beer in cans was taking off at this moment, and canning equipment developed for breweries was perfect for the use in wineries, too. So, they came up with the idea that made them popular: they debuted their Underwood Pinot Noir canned wine at the annual food and wine festival, Portland Feast, and it was a success. Since then, Underwood has also started to sell canned Pinot Gris and, more recently, rosé. Althought they are one of the most popular producers of canned wines, the trend is spreading and more and more players are embracing it.

The success of this alternative and less pretentious wine packaging is due to its affordability, portability and it is also supported by the fact that cans are recyclable and leave a very small environmental footprint.

FlipFlop Wines , Infinite Monkey Theorem and Field Recordings are just some of the companies who embraced the canned wine trend in the U.S. Here  you can find a brief guide to some different types of wine in cans compiled by the Los Angeles Times.

Aaron Hans also sells canned wines at Brooklyn wine shops and bar Big Nose, Full Body and Brookvin, and he said that their customers seem to prefer them.

In 2015, California based company MANCAN took a step further by launching one of the first ever man-specific wine products, that is – of course- in cans. Mancan was created with the aim to simplify wine consumption and make the drink appear a little less sophisticated and much more “casual”. The company also declared that the packaging is better for the environment, because cans are easier to recycle than bottles.

MANCAN received international recognition but also some critics because of its gender-specific labeling. 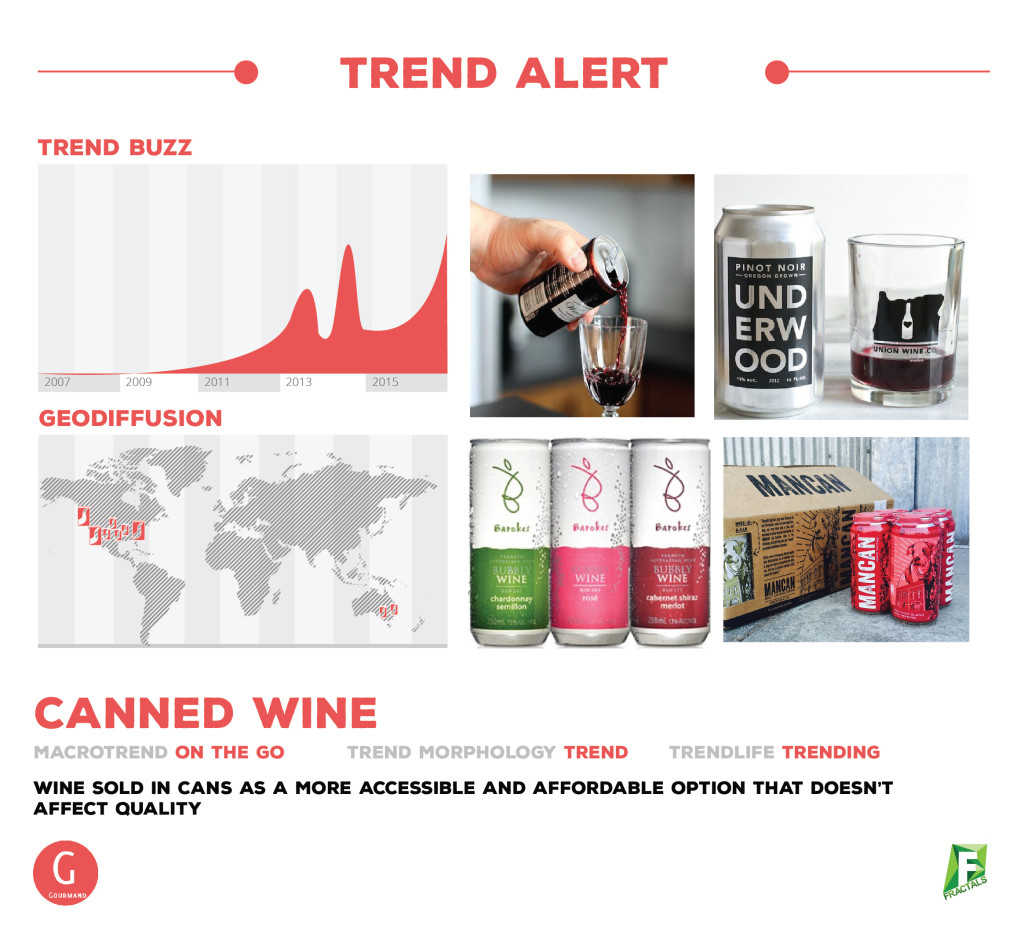 Do you want to know more about this trend? Write us at info@fractals.it and ask us for a more complete report!