An increasing use of emojis, bitmojis and avatar in digital resumés.

The most official work document is in the midst of its biggest transformation ever.

As Gen Z enters the workforce, companies are seeing digital CVs filled with emojis, bitmojis, avatars and instagram-friendly palettes, in an attempt to catch recruiters attention.

Of course, job seekers have always searched for creative solutions to make their resumés stand out, but while earlier generations just played with eye catching fonts and lines, today’s tech-savvy young people are personalizing theirs though the visual resources they use on a daily base in text messages and on social media.

Someone is even using social media itself as an original cv, as we reported here.

But if Anaëlle Antigny’s Instagram Stories Cv landed her 5 interviews and a job, not all recruiters love this emoji – invasion on text cv. In fact, these flashy résumés are colliding with employers efforts to reduce bias in hiring. Many companies are trying to strip down CVs to their most basic elements, such as college degrees and work experience, by running them through tools that remove photos and other design embellishments. Others are even blinding out names and addresses which could reveal gender, race or socioeconomic status.

Studies don’t support this growing trend, neither. In 2017, a research called “The Dark Side of a Smiley: Effects of Smiling Emoticons on Virtual First Impressions” concluded that “in face-to-face contact, smiling individuals are perceived as warmer and as more competent than non-smiling individuals… [but] contrary to actual smiles, smileys do not increase perceptions of warmth and actually decrease perceptions of competence.”

That means you should avoid using emojis in a work context when trying to impress people who don’t know you, for example when applying for a job (even though it’s ok to use them with colleagues and collaborators once you work with them).

But there are also companies who love and encourage the extreme personalization they are seeing in Gen Z Digital cvs. Jeni’s Splendid Ice Creams LLC, a gourmet-dessert chain based in Columbus, Ohio, was actually impressed by a résumé they received for a finance job earlier this year, which included an an avatar of the applicant sweating. “That was to show they hustle like no one else: that is an important attribute that we prize”,  said CEO John Lowe.

The Internet is divided as well, as Twitter debate demonstrates.

But whether they love to see them in Cvs or not, it’s a fact that recruiters are using emojis even more than job seekers. In 2016, L’Oreal asked people to apply for jobs with emojis , and recruitment marketing company TMP Worldwide challenged their employees to describe their professional roles using just emoji combinations, just to mention a few examples.

In the experiences section of her resumé, Stephanie Webster, an industrial and product design student at the Georgia Institute of Technology, used icons of a paw print and a swimmer to illustrate previous jobs as a dog day-care worker and swim instructor.

As reported by CEO Brynn Putnam, Fitness startup Mirror, based in New York City, recently received a résumé for an engineering job that had a series of photos splayed across the bottom, making the cv “look like a Tinder profile”. Hiring managers are also saying resumes are increasingly displayed in Instagram-friendly palettes of mint green and pastel pink.

At a high school near Indianapolis, an applicant this spring sent a digital résumé for a teaching post with his bitmoji waving and the word “hi” at the top, says Erica Posthuma, a chemistry teacher at the school.

Designers are always experimenting with colorful cvs, whether they actually send them to companies or not. This one, which is entirely made with emoji, is a clear example of that.

If you want to embrace the trend, you can create your own emoji resume mosaic using this web. 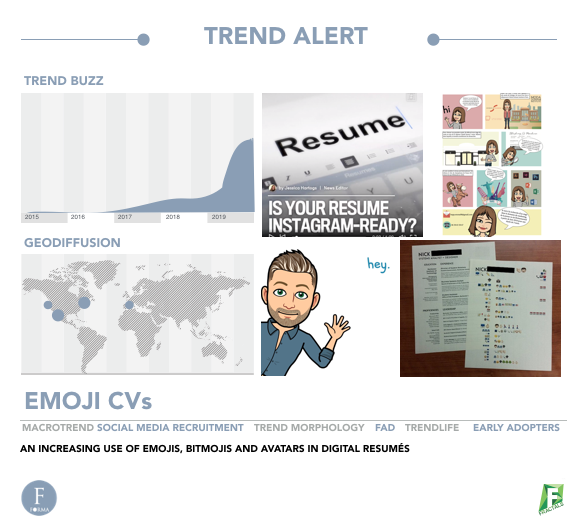 So, what do you think? Would you use emoji in your resumé? Give us your opinion at info@fractals.it and, if you spotted another evidence of the trend, don’t hesitate to let us know!