“Hiding” fruits and vegetables in appealing foods in order to increase their consumption.

Every clever parent knows “hiding” vegetables in other foods isn’t a new concept at all. But now brands are making it a lot easier for kids and adults who want to eat healthier to get their veggies… even if they hate them.

As people are more aware of the connection between their health and the food they eat, many consumers are ditching artificial ingredients in favor of healthier options. Food companies are taking advantage of this trend by adding fruits and vegetables to a variety of convenience foods that look appealing to children and, in general, to all those persons who generally don’t eat them.

This is meant not just to satisfy the growing demand for clean eating, but to actually increase vegetable intake and reduce alimentary issues.

A study conducted by the Produce for Better Health Foundation in 2015,  showed that the per capita consumption of vegetable decreased to 7% in the years 2009 to 2014 in the U.S, probably due to people consuming fewer side dishes during their meals.

Once they acknowledged this problem, food companies saw a great opportunity to create products that use fruits and vegetables in creative and unexpected ways in order to make them more appealing to kids and to increase their consumption among adults as well.

The trend is really popular today, and analysts say it won’t die down anytime soon: in its report “The Pinterest 100”, the platform predicted people will continue looking to cut their calorie intake by changing comfort food for vegetables in the near future.

Founded in January this year, Miami-based startup Peekaboo is building an empire by selling ice creams containing one hidden vegetable ingredient. Founder Jessica Weiss Levison said she decided to start the company after struggling to have her children eat veggies.

“The idea struck to slowly sneak increasing amount of veggies into their ice-cream that would be imperceptible in taste”, she said.

The Green Giant brand is known for its line of frozen veggie products like mashed cauliflower, veggie tots, and roasted vegetables. Gato & Co puddings use vegetables to reduce refined sugar content and Dr Oetker’s new “Yes, It’s Pizza”  bases are made with veggies.  Archer Daniels Midland and B&G Foods are also selling products that sneak fruits and vegetables in them.

ZENB is an organic food company that makes vegetable-based food bars, available in flavors such as beet, corn, and red bell pepper. 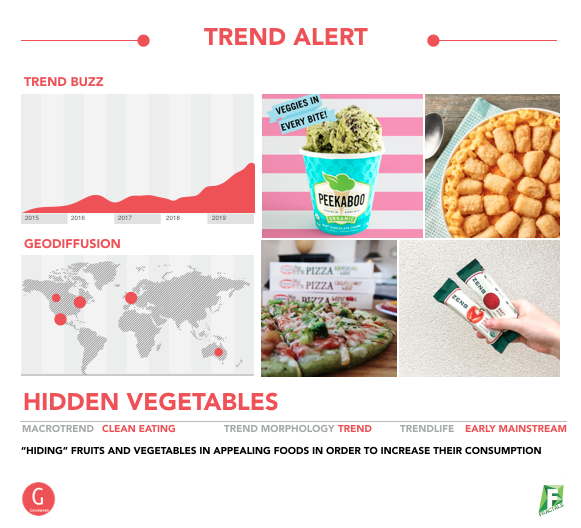 Have you spotted another evidence of this trend? Write us at info@fractals.it to let us know: you may become a part of our amazing network of researchers at Gourmand!