We saw this coming: early 2000s are back. And with them, low-rise pants are returning in vogue. Do you remember Christina Aguilera, Britney Spears and Paris Hilton wearing them with extreme crop tops? Prepare to see those kind of looks again, but in a more relaxed and sometimes ironic version.

We are not talking just about  jeans, and not even just about pants, actually: low-rise bottom pieces (skirt included!) were all over the place in the recent fashion weeks, bringing fashion nostalgia to the next level.

The Internet may be not so happy about that, but signals anticipating the comeback were everywhere, and – let’s be honest – quite impossible to ignore.

Back in 2017, Bella Hadid was seen wearing a pair of low-rise boyfriend jeans and last November, Jennifer Lopez was spotted wearing a pair of wide-leg thong pants . Brands like Kith Sport, Baja East, Fenty Puma by Rihanna, and Tom Ford started to reintroduce the style in their spring 2018 collections.

Kirk Millar of Linder NYC paired low-rise bottoms with visible bikini bottoms or undergarments in both the spring 2018 and the spring 2019 runways.
In December, he told The Cut  that  he thought they would become quite popular among people who like to wear slightly ironic clothing. Glamour also warned that low- rise pants was returning and Levi’s added low-rise styles to its S/S 19 line.  Now, autumn/winter 2019-20 Fashion weeks (and especially the New York runways) confirmed they are to stay.

At New York Fashion week, Dion Lee showed at least eight variations on low-rise pants, pairing them with structured corsets to emphasize slim hips. Opening Ceremony included them in its fall collection in two different versions. Eckhaus Latta opened their show with low-rise pants with gaps at the knees and Proenza Schouler embraced the look through wide-legged trousers and maxiskirts.

Priscavera adopted the trend in the form of transparent vinyl jeans and both Area and LRS showed low-rise miniskirts. Helmut Lang presented both low rise pants and low rise skirts, as well. 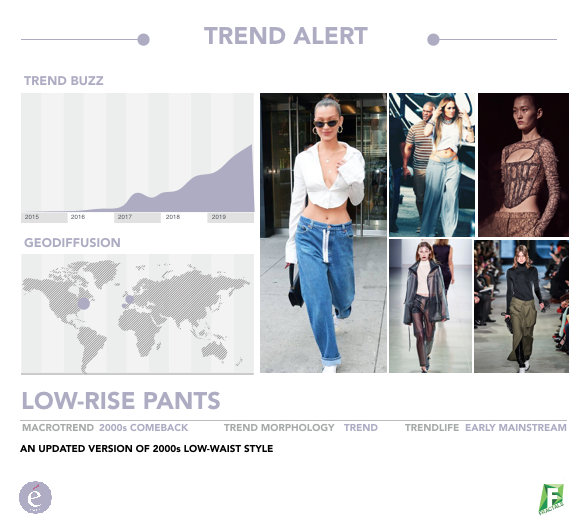 So, what do you think? Will you travel back to the 2000s? Send us your pictures at info@fractals.it and show us how you style the trend!