Born as a way for stores to clear out old stock, in Japan the so called fukubukuro (which literally means “lucky bags”) have become a true annual craze.

These are special packs that can contain anything from clothing to beauty items or even food, with the peculiarity that people who buy them don’t know what kind of products they will find inside.

And if you think that only low-cost items are included in the boxes…think again! Luxury brands like Burberry, Armani, Versace and Tory Burch have all had their products in the mix.

At the beginning of every year, brands and retailers in Japan release their own “fukubukuro” and people literally queue up for hours to get one. In fact, today these mysterious bags are viewed as a way to propitiate good luck, symbolizing the idea that if you start the year with prosperity, you will have similar fortune all year long.

Inspired by the success of this Japanese custom and tapping on the growing trend of unpredictability, now several beauty brands are starting to launch their own mystery bags outside Japan.

Social commerce site Beautylish was one of the first to launch its own mystery bag six years ago. They still put it on sale every year on December 26th (Boxing Day) and they ship it out to customers in early January. Every bag contain best seller products, new releases, limited-edition items and pieces from past seasons. There are also some bags which contain more expensive items, for an extra dose of luck.

Fast-beauty brand Colourpop launched its first mystery bag in 2016 and has since released two others to date, with the main goal of getting their most loyal and active fans involved ahead of new launches.

Colourpop marketing director’s Jordynn Wynn said: “Customers are spending despite having almost no idea what is inside [so] they really have to trust the brand”. And it seems that they really, really trust it, because the company sold over 25,000 mystery bags in just one hour.

In 2018, more brands jumped onto the trend bandwagon. Fenty Beauty launched a mystery surprise gift set signed by Rihanna herself. Charlotte Tilbury put on sale a “lucky box of magic makeup” on Cyber Monday, which was available at two different price ranges.

Sephora’s mystery bag took the Internet by storm since instagrammer @whitepolkydots posted a photo of the packs she discovered at one of their stores in Germany. Each one of the three different bags — a “mystery eyeliner kit,” a “mystery lip kit” and a “mystery cheek kit” contained two known products, one surprise item and a collectable pin.

Beautyblender, which is mainly known for its sponges, launched a so called “sweet surprise” mystery bag on sites like Net-a-Porter, while Japanese beauty brand Tatcha announced last January it was releasing mystery bags containing high-quality skincare products worth over $100. 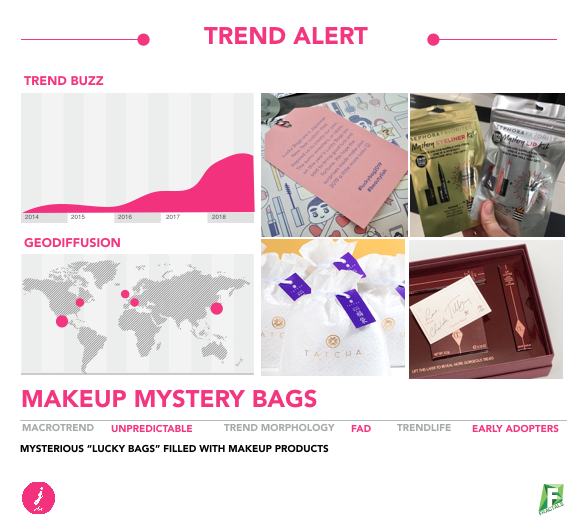 Have you spotted an emerging trend in beauty? Write us at info@fractals.it and get a chance to join our network of observers!