Programs that encourage kids to move at school as a way to boost focus and avoid fidgeting.

World population is moving too little and that’s a problem, especially for the young ones.

Childhood obesity is getting worse in the US, and in Canada just 13 per cent of preschool children and 9.5 percent of children and teens are meeting the Nation’s 24-hour Movement Guidelines.

In 2013, the World Health Organization estimated the global cost of physical inactivity was approximately $54 billion US in direct health care, plus another $14 billion in lost productivity.

While the awareness around this topic is growing, researches show that physical activity not only improves health and wellness, but it also leads to better cognitive performance and fewer behavioral issues.

A study published in the journal Pediatrics found that physical activity improves behavior in classrooms and helps kids do better in reading and math.

Dr. John Ratey,  expert in neuropsychiatry and associate clinical professor of psychiatry at Harvard Medical School, explained the reasons behind that: “When you move, you stimulate all the nerve cells that we use to think with, and when you stimulate those nerve cells, it gets them ready to do stuff”, he told CNN.

“When you exercise, you turn on the attention systems, so that means you’re (paying) better attention”, he added.

This is now pushing more and more schools worldwide to embrace movement programs that encourage kids to move.

At Roland School in Canada, they are proud of their Sensory Path: this is a colorful  activity map on the floor of the school’s main corridor, which instructs kids to hop, squat, do pushups and crawl. They follow the path every morning and after lunch, when going to class, in order to focus more and perform better during the lessons. If teachers notice students fidgeting in class, they send them to the path again.

The Sensory Path was inspired by an Alberta initiative called Don’t Walk in the Hallway, which was launched in 2015 to promote physical activities indoors at school.

As a part of the program, existing floor tiles in school hallways were covered with a brightly coloured adhesive. As they walked between classes, kids could then jump, skip, or hop across the colours, creating patterns in movement.

In the U.S, the National Association of Physical Literacy provides schools what they call “BrainErgizer” videos: five-minute movement videos developed in conjunction with the University of Connecticut based on research on what stimulates the brain. Kids can watch them between lessons and recreate the movements in order to improve their cognitive performance.

GoNoodle is also promoting physical activity in the classroom through entertaining videos that get kids moving around. The company says four out of five elementary schools in the United States are already using them to teach physical literacy to their young students.

Active Schools is another US movement which is trying to make physical education and physical activity a bigger part of the school day: their goal is to have kids moving at school at least 60 minutes per day.

Developed in Australia by an Occupational Therapist and a Kids Personal Trainer, The Kids Coach describes itself as “the world’s premier fitness program for kids”. It’s a video-based program for schools, and it offers exercise sessions and movement brain breaks that are scientifically designed to improve focus and learning. 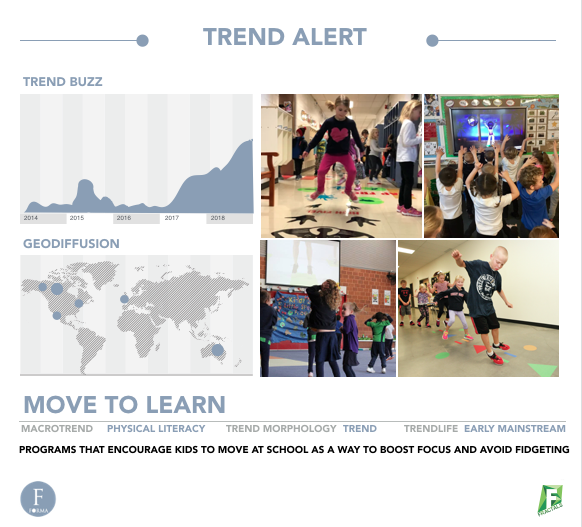 Do you want to know more about this trend? Write us at info@fractals.it and ask us for an in-depth report.