The lack of focus is perceived as today’s biggest problem: as a result, new initiatives are emerging to teach people how to concentrate while tech companies are creating tools to fight distractions and boost productivity.

On the other side, the interest in brain hacking is growing and restaurants and brands are starting to collaborate with neuroscientists to sell plates and drinks that enhance brain functionality (We talked about it here)

In this scenario, nootropics coffees are obviously gaining popularity.

Sometimes referred to as a “smart drug”, nootropic is a substance that enhances cognition and memory, and facilitates learning. But, most of all, it is claimed to be useful for boosting productivity and maintaining focus.

Two of the most popular nootropics are caffeine and L-theanine, both of which can be found in a regular cup of coffee.

For the nootropic industry, targeting coffee drinkers is a logical next step.

There are already several nootropic coffee brands on the market, all claiming to enhance brain functions.

Mastermind’s organic Hyperfocus Coffee, for example, is supposed to boost mental clarity and energy. Kimera Koffee claim to have created “a special blend” that will “turbocharge your brain.” Combining organic coffee beans from the Dominican Republic with amino acids and nootropics, they say the’ve created a drink capable of boosting both your energy and your cognitive function.

Thinknoo have also developed “two naturally-inspired supplements” which , taken with your daily coffee, would  result in better mental energy and focus. 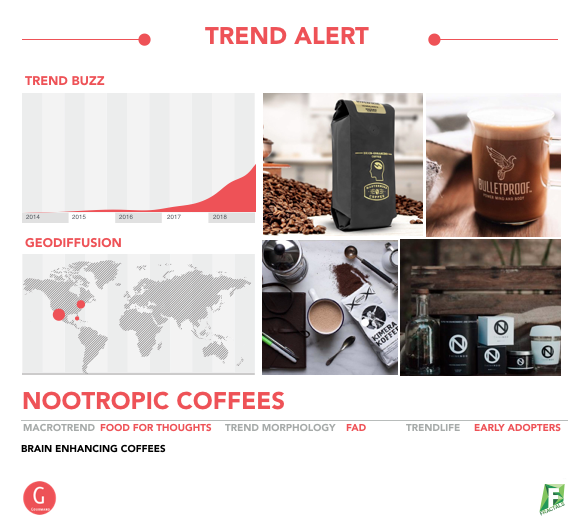 Would you have a cup of nootropic coffee? Tell us your opinion! And if you want to know more about this trend, please write us at info@fractals.it asking for a more complete report.