A general concern about what we ingest and the seek for an healthier lifestyle are impacting the food and beverage industries. Plant-based diets are now more popular than ever and the interest in superfoods is rising.

Encompassing everything from yoga to green juices, “Wellness” has emerged in the past few years as both a buzzword and a $4.2 trillion industry. It’s clear that brands simply can’t afford to ignore this anymore. As new companies emerge, major players are forced to rethink everything from marketing strategies to ingredients in order to meet the evolving tastes of the modern consumer.

And now a bunch of beer companies are moving a step further by entering the fitness game.  These producers are crafting beers for different types of athletes, from runners to cyclists, using natural ingredients that help them replenish electrolytes after a sport activity and more water for a better hydration.

Sufferfest Beer is marketed to adventurers and athletes, helping them recover after a competition and refuel for their next workout. It’s made with ingredients like salt, black current and bee pollen that give it both health benefits and flavor. It is sold at running and cycling shops, climbing gyms and even CrossFit locations, cementing its place in the fitness market.

This year the Boston Beer Company launched 26.2 Brew, a golden ale created by runners, for runners. It is brewed with Himalayan sea salt to aid with hydration, and it only has 120 calories and 9 carbs per serving.

In 2016 Dogfish Head, a craft brewery based in Delaware, released  SeaQuench Ale, a sour beer brewed with lime and sea salt that apparently resembles Gatorade. According to Nielsen data, it is now the fastest-growing beer in the sour category.

ZēLUS Beer, which is “crafted for your active lifestyle,” is brewed with more water to keep athletes hydrated after an athletic event. The Boston-based Harpoon Brewery recently launched a “recovery beer” called Rec League that’s brewed with sea salt and chia seeds, while Avery Brewing in Colorado produces a Go Play IPA brewed with sodium and potassium. 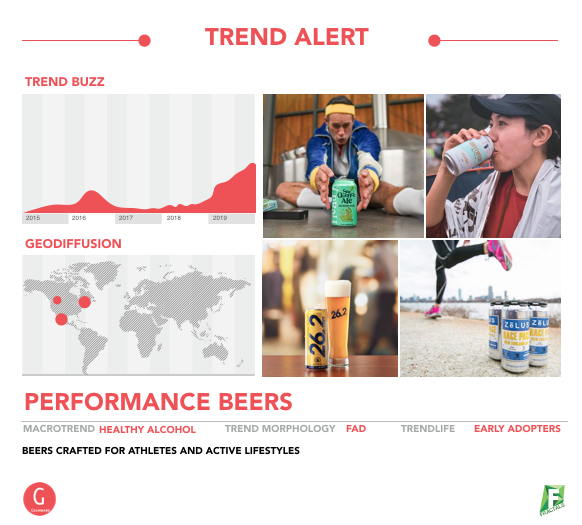 Have you spotted another evidence of this trend? Tell us at info@fractals.it!