A vegan diet with the addiction of sustainably sourced seafood.

Seaganism has been predicted to be one of the top food trends for 2020. Despite the fact that the term was actually first coined in 2016 by food Writers Amy Cramer and Lisa McComse, it has skyrocketed in popularity over the past year, following the rise of veganism.

Those who embrace this eating philosophy follow a strict vegan diet, except they do allow the consumption of seafood. Although this may sound you very similar to pescatarianism, the main difference is that seagans don’t eat dairy – so eggs, milk and cheese are all off their shopping list. Another key point is that there’s a real emphasis on sustainably-sourced products, which means not all kind of fish is included.

The vegan diet has become increasingly popular over recent years, particularly for its environmental and ethical appeal, but many people who jumped on the veganism bandwagon have found out that keeping up with protein and omega content isn’t as easy as it seems. Many studies highlighted the downsides of a plant-based diet, which lacks in certain vitamins and minerals. As fish and seafoods are known for being a great sources of both, vegans are seeing in seaganism the perfect solution to this problem.

Searches for “Seaganism” more than doubled in volume on Google since November 2019, and there are more than 2900 evidences for #seagan on Instagram. In the Uk, where the diet is especially popular right now, seafood consumption increased by 12 percent last year, in contrast with the fall in red meat consumption. The trend is also fueling the renewed popularity of seaweed, which is more sustainable than traditional seafood. In fact, searches for aonori seaweed were up 127% on the Waitrose supermarkets website.

Chefs are tapping into the trend in a very innovative way with the so called “seacuterie”: reimagined charcuterie using seafood instead of meat. This new concept originated in Australia and it’s now rapidly spreading all over the world (there’s a lot of buzz around that in Ireland), which mean we will see more and more seacuterie popping up on restaurant menus this year. Prepare to taste sealami (a seafood-based salami made with tuna and peppers), tuna ham, or squid mortadella, among other creations. 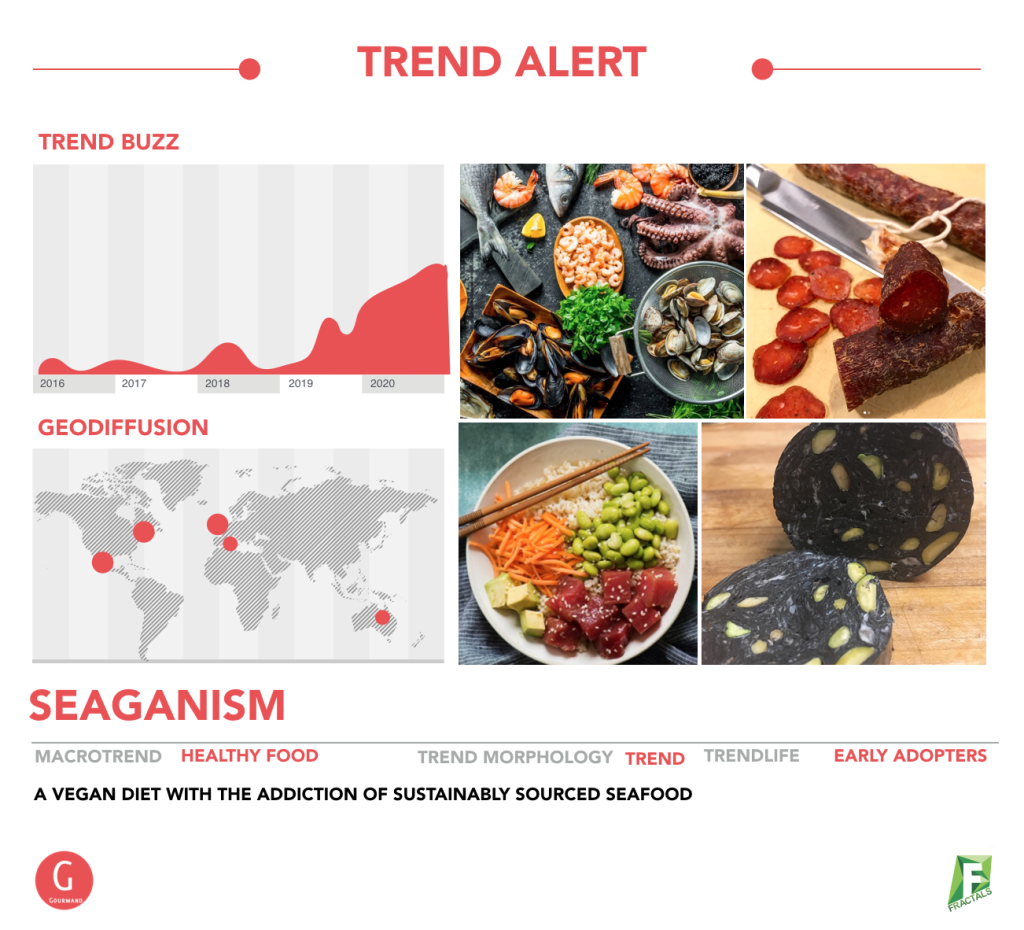 Do you want to know more about this trend? Write us at info@fractals.it and ask us for a complete report!