Cocktails infused with savory ingredients from the kitchen, like mushroom or meat.

If you go to the coolest mixology bars in cities like San Francisco or London this summer, you will probably see some “Umami” cocktails on the menu. These are drinks containing unusual ingredients such as turmeric, mushroom, garlic or even meat and, yes, they are one of the most controversial cocktail trends of the moment.

But why Umami, and why now?

The term comes from Japan, and it’s used to indicate those meaty, savory tastes we experience with high-protein foods and broths. This taste sensation is produced by the presence of glutamates and nucleotides and it’s considered to be the fifth basic taste along with the tastes sweet, sour, salty, and bitter.

In 2015, some brave early adopter started to steal food ingredients from the kitchen with the goal to recreate this sensation in cocktails, but we have had to wait till the end of 2018 for the trend to slowly start spreading, and till summer 2019 to see it booming.

It totally make sense that umami cocktails are becoming more popular right now: stealing food ingredients from the kitchen and use them for your drink is a good way to reduce waste in restaurants, and high-protein ingredients such as mushrooms provide a healthy approach to mixology. Also, these savory cocktails gives people a brand new way to experience food, meeting the demand for new gastronomic experiences that move the modern consumer.

At KYU, an Asian restaurant in Miami, they serve the OOo-mami, a drink inspired by Korean fried chicken. First they wash tequila in fried chicken fat; Then, they add mezcal and three more housemade flavouring agents containing, among other things, garlic, cumin, shichimi (a Japanese spice mix) and lime. According to head bartender Danny Villa, not only it’s a good way to cross-utilize ingredients from the kitchen and reduce waste, but it also makes pairing easier.

James Bolt, owner of The Gin Joint in Charleston, incorporate everything from cauliflower to dandelion greens and seaweed in his drinks. One of them turns purple cabbage into a syrup, adding to it crème de cassis, Hefeweizen, fennel seeds, and Champagne vinegar. The syrup is then mixed with gin, lemon juice, vermouth, and smoked honey. He says that creating it is “just like cooking” .

At Alden & Harlow in Boston they experimented with sautéed maitake mushrooms. They cooked them in butter with shallots, rosemary, and tarragon and then just dumped the mix into a neutral grain spirit. They called the cocktail “Maitake on a Manhattan”.

They also used grilled carrots, roasted sweet potatoes, or fresh pea greens for their drinks and in the Meat Your Maker they mix Irish whiskey with Fernet-Branca washed with rendered beef tallow.

The Mushroom Martini is one of the most popular (and instagrammed) umami cocktails. The reason is that not only it’s unusual and apparently tasty, but it’s also good for your health: mushrooms, in fact, strengthen the immune system and lower cholesterol. Here’s a recipe, in case you want to try.

At Bove Lover in Monza, Italy, they use the American fat washing technique to recreate the taste of meat in their cocktails.

At Scottish distillery Arbikie, they tested the use of peas in drinks as a part of a new study that found out that making gin from fermented peas instead of wheat have a far smaller environmental footprint. 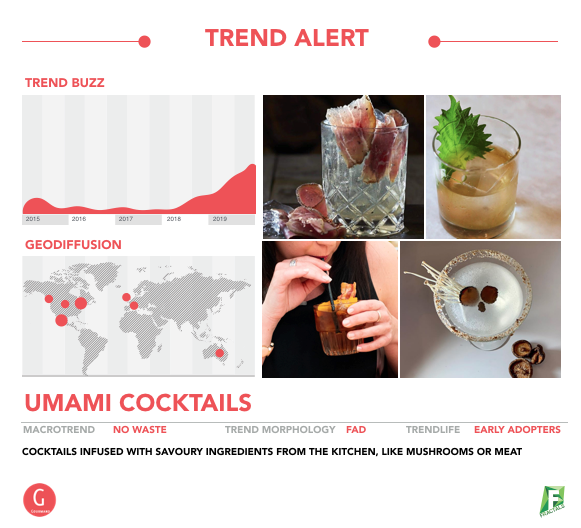 Will you be brave enough to try an umami cocktail this summer? Send us your comments at info@fractals.it and let us know you spot another evidence of the trend in a bar near you!