Restaurants located under the sea.

Underwater hotels and restaurants are emerging as the new luxury destination for ultra-wealthy tourists. A sense of exploration and adventure is the key driver behind the recent opening of high-end dining places located under the sea and offering customers 360 degrees view of the marine life.

The fascination for the underwater world have been gradually risen during the last couple of years, and first led to the explosion of the mermaid trend. As the anxiety around climate change is growing and sea level is rising, this interest is now evolving from a colorful fantasy to the search of an alternative, and sometimes dystopian, life.

This is happening on a global level. Designers are creating garments that would enable humans to breathe underwater and seaweeds have been pointed out as one of the top, sustainable food trends of this year.

Last month, Europe’s first underwater restaurant opened in Norway. It’s called “Under” (which also means “wonder” in Norwegian) and it’s hosted in an amazing building that looks like a giant tube partially submerged in the North Sea.

It was designed by local architecture firm Snoehetta, that also created the Opera house in Oslo and the National September 11 Memorial Museum in New York, and it targets a new type of wealthy customer that wants to explore the underwater world as he would do with another planet. Menu is locally sourced, and a full 18-course meal can cost up to 3,700 crowns ($430) per person including drinks.

The Muraka is another underwater hospitality centre that recently opened at the Conrad Maldives Rangali Island resort, which is also home to Ithaa, one of the world’s first underwater restaurants. Like Under, the Muraka sits 16 feet below sea level, and sleeping there during 4 nights could cost you $200,000.

In South Africa you can enjoy the views under the water level while eating at the stern of the Phantom Ship in the Cargo Hold Restaurant. 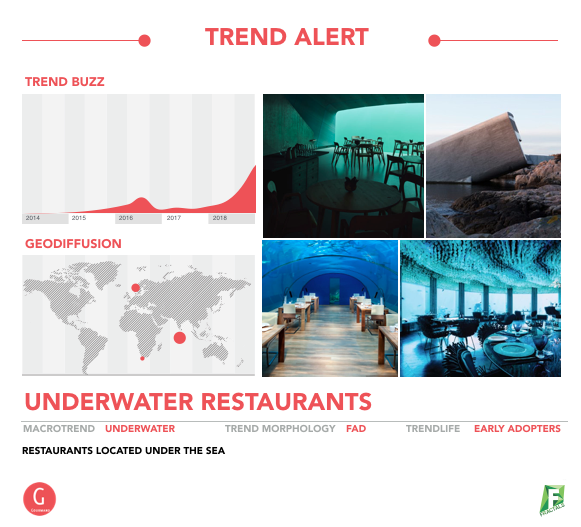 Do you want to know more about this trend? Write us at info@fractals.it and ask us for a (literally!) in-depth report.