The rising trend of alternative vegetarian proteins shows no signs of slowing down. In particular, 2021 is predicted to be the year when artificial eggs will proliferate globally, becoming the fastest-growing plant-based alternative food.
These new egg substitutes go far beyond existing replacements, with the aim to perfectly replicate the look, taste and versatility of chicken eggs using plant proteins. By mid-2020, US leader JUST Egg had already sold the equivalent of 50 million of its fake eggs and is now reaching global expansion (they are building a $120 million facility in Singapore to meet the demand of the Asian market).
Increasing trend of vegetarianism across the globe is a major factor that will help the artificial egg market gain a considerable consumer base in the years to come.
Health benefits are an undeniable plus: in fact, being animal free, fake eggs contain no cholesterol. Furthermore, they hold immense potential in the developing parts of the world where artificial eggs can also include essential nutrients missing from local diets, thereby helping fight nutritional deficiency. New research linking overconsumption of natural eggs to Type 2 diabetes is only the latest bit of information making the artificial egg market a highly anticipated playing field.

For many people, the environmental benefits behind plant-based eggs are another major selling point. Egg-laying hens, even free-range ones, are a source of greenhouse gases, which contribute to climate change. Choosing plant proteins over animal proteins reduces this footprint.

Noblegen from Canada embraced the fake egg trend with its algae-based, powdered product “the egg”. Tapping a blend of soya, potato, pea and chickpea, Israel’s Zero Egg is already planning its entry into the U.S. market. Oggs Aquafaba in the UK uses chickpea extract, while Evo Foods in India bets on native plant ingredients. Being the first fake eggs produced in France, Les Merveilloeufs vegan alternative is made from legumes. It not only looks and tastes like a chicken’s egg, but it also comes with its own shell. Currently, the “shell” is crafted out of plastic, but an eco-friendly version is being made.
Clara Foods in the US employs fermentation for its egg-white alternative, that’s aimed to promote human health, animal welfare and sustainability. 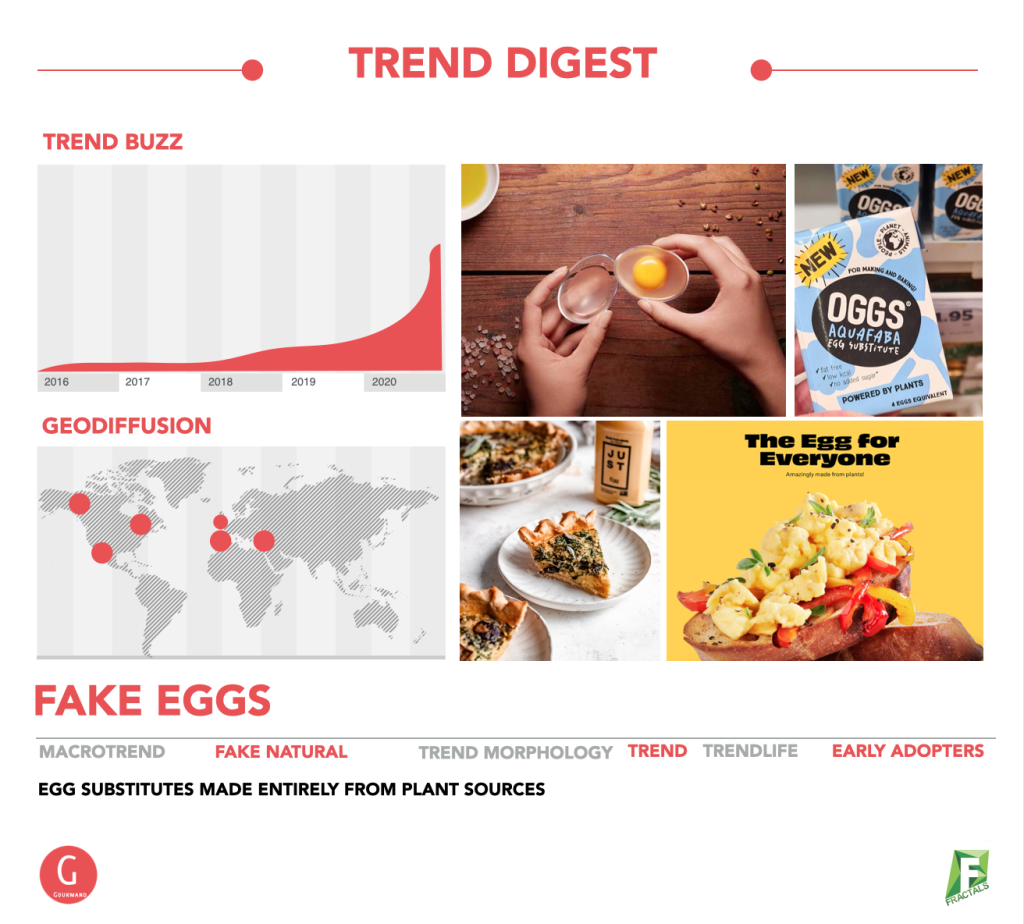 Do you want to know more about this trend? Write us at info@fractals.it for an in-depth report!