The CO-VID19 pandemic is making Google Docs even more popular, but not for the reason you would probably think. This has nothing (or a little) to do with remote working or homeschooling, but with the need of human contact and entertainment during lockdowns. And here’s the thing: What was once a “boring” business or educational resource, has now officially become a cool tool for chatting and have fun.

We saw it coming: long before coronavirus, students had already turned the word processor into an undetectable messaging app.  As more and more educators were adopting Google Docs to do collaborative exercises in class, the students found a way to use them to organize conversations behind teacher’s back.

Sometimes they used the service’s live-chat function, which doesn’t open by default, and which many teachers don’t even know exists. Or they cloned a teacher’s shared Google document and then chat with their friends in the comments.

Now, as people is forced to spend many hours at home, Google Docs are turning not just into a tool for sharing information and content, but also into an unexpected source of entertainment, hosting escape rooms, collaborative puzzles and even virtual stand-up comedy shows.

During the Coronavirus crisis, the UN used a shared Google document to solicit art that would help spread public health messages. (The response was so overwhelming they had to move to a different platform.)

The game takes place entirely within the Google Docs ecosystem and centers on an intense desire to go outside, mirroring millions of people’s current reality. Players navigate the room by clicking links scattered across dozens of interconnected documents.

Two days after Smith put out his escape room, comedian Marissa Goldman launched her MARISSA’S GOOGLE DOC PARTY, a weekly comedy show that brings comics from different U.S. Tv programs such as The Onion, Reductress and Jimmy Fallon’s The Tonight Show into one shared doc.

The show is best experienced via a YouTube livestream, where viewers can watch comics drop gifs, memes and videos into the Google Doc. Of course, viewers can also pop into the document as they watch, for a more immersive experience.

When the Akron Art Museum in Ohio shut its doors for quarantine, it sent a Google Doc to other museums around the world, inviting them to start building puzzles based on their collections. Each institution submits one clue, based on an artwork in its digital archives, to form a different crossword every week.

The museums also collaborate on Sudoku puzzles, and the games are being shared on social media with the hashtag #MuseumGames. 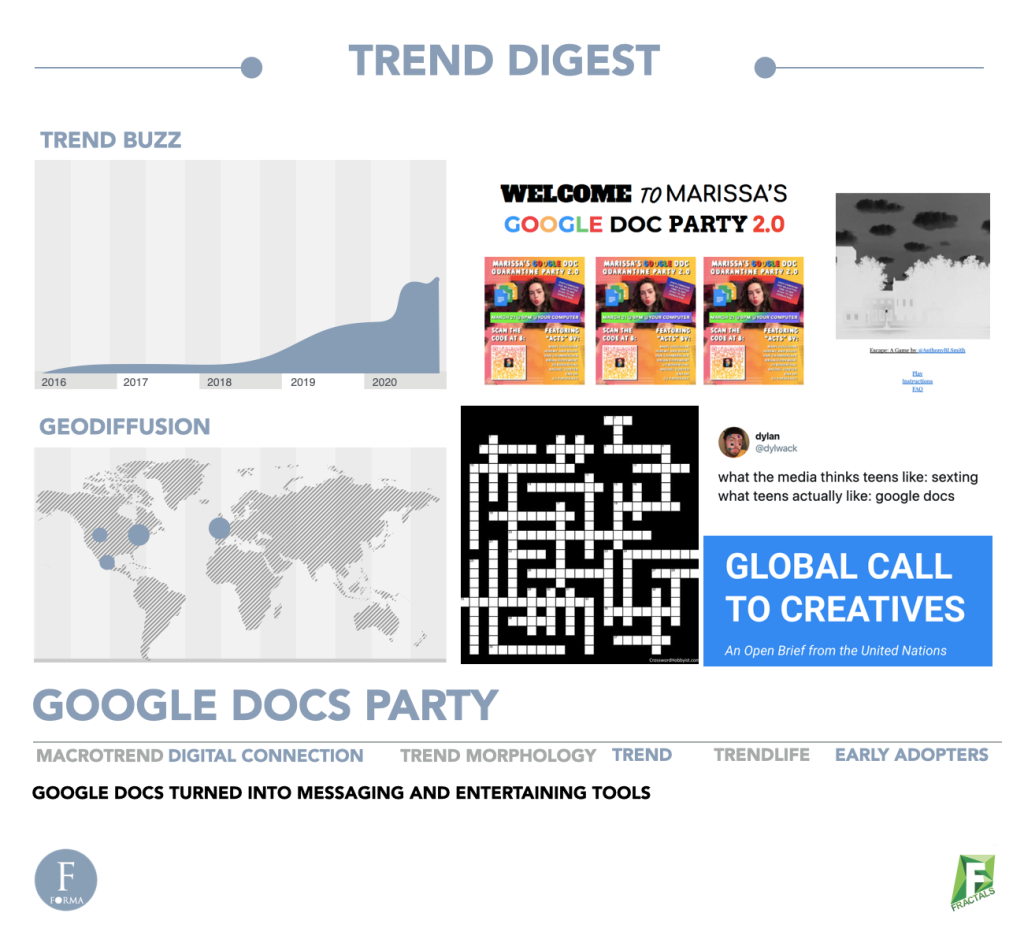 Do you want to know more about this trend? Write us at info@fractals.it to ask us for an in-depth report.