No and low (nicknamed ‘nolo’) alcoholic drinks sales are rocketing, in one of the biggest beverage trends of 2020.

We have seen this trend growing during the last couple of years, as the pursuit of an healthier lifestyle boosted the consumption of hard seltzers and non alcoholic drinks among young generations.

The rise of the wellness movement is, in fact, one of the driving forces behind this trend, with consumers now increasingly aware of the risks of excessive alcohol consumption, and more inclined to avoid booze or reduce their intake as a result.

Global campaigns to encourage moderate alcohol consumption are also influencing consumers’ drinking habits, especially in the U.S and in the U.K, where the idea of intentionally lowering or cutting out alcohol consumption has been marked by new terminology like “sober curious,” and “mindful drinking”, and abstinence-focused challenges like Dry January or Sober October are increasingly gaining attention on social media.

In 2019, we told you about “performance beers”: an emerging trend that was seeing beer brands targeting athletes and fitness lovers with healthier and highly hydrating options.

In this context and with half a million Instagram users currently using the #SoberIsSexy hashtag, beer – and especially craft beer –  market is forced to embrace the “nolo” trend in order to survive after the coronavirus lockdown.

According to the annual report by the Society of Independent Brewers’ (SIBA) British Craft Beer, the number of 18-24 year olds who say they don’t drink went from 6% to 23% in the past 12 months. The report shows there has been a 30% leap in sales of no or low-alcohol beers since 2016, with consumers increasingly expecting to have a wider range in pubs and bars. A separate study by Euromonitor has shown that the UK market for no and low-alcohol beer has doubled in four years, with sales of £63m estimated for 2020.

According to Nielsen, sales of non-alcoholic beer in the U.S at the beginning of 2020 were already up 39% versus the same time period last year. In Germany (where this kind of drinks  was first popularized), the so called “driving beers” now make up about 10% of their overall ale sales, while in Italy non alcoholic beers sales experienced a 4,1% growth during the last year.

The global market for non-alcoholic beer is expected to grow at a CAGR (compound annual growth rate) of 7.5 percent over the coming years, reaching a value of 25 billion U.S. dollars by 2024.

Heineken CEO, Jean-François van Boxmeer, said that the  success of Heineken 0.0, Heineken’s zero alcohol product, “helped deliver the strongest growth by volume to the Heineken brand in over a decade.”

Brooklyn Brewery unveiled its non alcoholic beer Special Effects in 2019 and it immediately became a success. Within two months of the Non- alcoholic Hairless Dog Brewing debuting in select liquor stores in Minneapolis, they sold 1,000 cases and decided to go national.

Following the “performance beers” trend, non-alcoholic beer brand Athletic Brewing is now growing its presence in sports, both in terms of availability at events as well as through sponsorships.

Staying on the fitness tip, Surreal Brewing Company sells a Red IPA that has no sugar and weighs in at a belt-tightening 33 calories — which is roughly one-third of the other Non Alcoholic options. 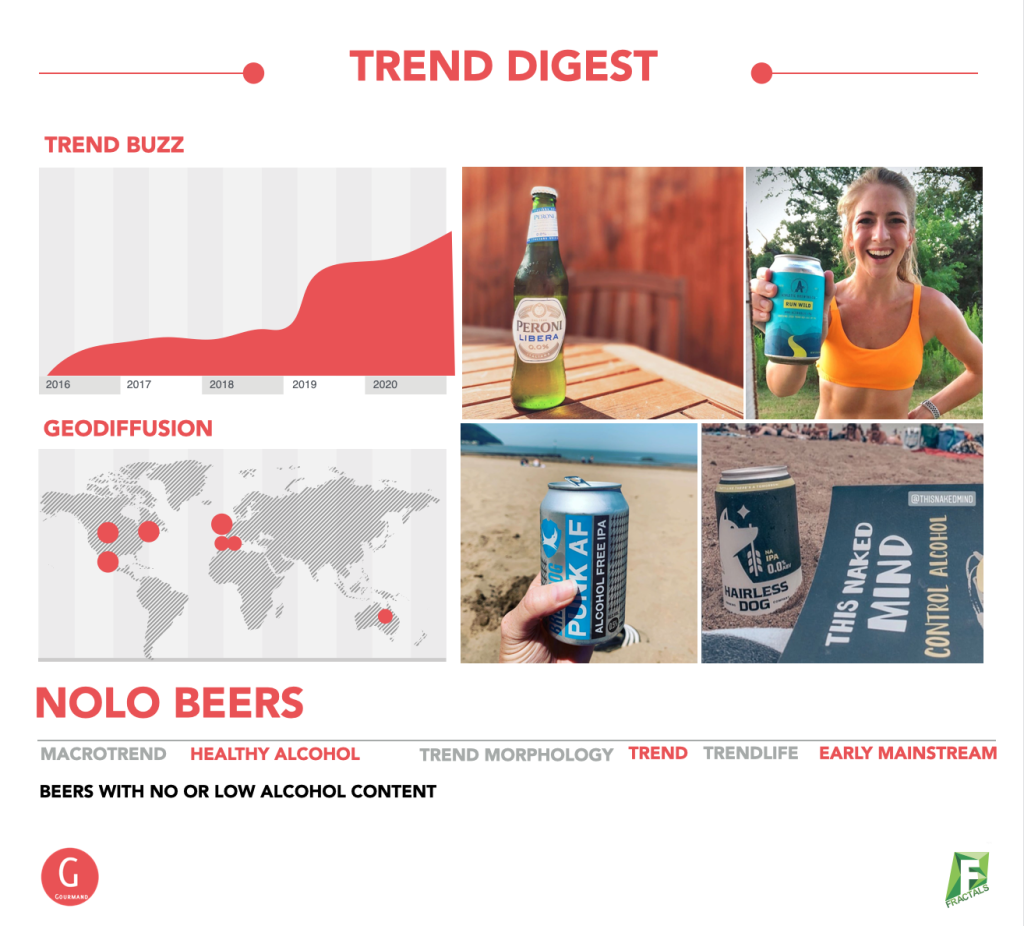 Do you want to know more about this trend? Write us at info@fractals.it and ask us for an in-depth report!