The Coronavirus crisis has forced fashion houses to rethink almost everything, from their own production (face masks became a priority during the lockdown) to, most notably, the way to launch and promote their collections.

As attending IRL fashion shows will be impossible at least until fall, designers are forming new ways to showcase their new clothes and express their ideas during the digital fashion weeks staged to replace big production catwalks and presentations this season.

A new buzzword has even been created: “Phygital”, meaning the blend of physical spaces and digital technologies which has been used, for example, to showcase the new collections by Ermenegildo Zegna and Valentino.

The main challenge with virtual runways is that they have to hold a viewer’s attention long enough to take in a whole collection, so they can’t be just a copy of the physical: the goal, here, is to create new immersive experiences that let the brand stand out , playing with technologies, providing new points of views, and generating the highly desired “wow effect” in the viewer.

The experiments we are seeing right now are probably just the first approach to a new format which potential has still to be fully unlocked.

Shanghai and Moscow were among the first Fashion Weeks to go digital, in late March and April. The Chinese experience was particularly innovative: labels Xu Zhi, Roderic Wong and Andrea Jiapei Li demonstrated the vast potential of the virtual runway, tapping on augmented reality and CG technology for an immersive and incredibly life-like 360-degree experience:

Upon entering the website that hosts all three brand via a QR code, viewers are whisked into a cavernous hall, prompting you to swipe to explore the space and tap into each one of the brands as they pop up on the screen. Within each brand universe is a “runway” show of their Fall/Winter ’20 collection, and a conceptual video that encapsulates the designer’s inspiration for the season.

On May 22, designer Anifa Mvuemba debuted the first virtual fashion show for her brand Hanifa, featuring 3D renderings of pleated minis and sinuous bias-cut dresses. The show was unlike anything fashion had seen before: No audience, no visible models, just fashion fully rendered in a rich virtual space.

During the same month we also saw what has been defined “the first high fashion runway show entirely from home”: a YouTube-streamed edition of CR Runway, the special fashion show run by Carine Roitfeld, the former French Vogue editor and Tom Ford muse, and her son, Vladimir Restoin Roitfeld, to raise money for the amfAR Fund to Fight Covid-19. During the show, Olivier Rousteing of Balmain, Pierpaolo Piccioli of Valentino and Virgil Abloh of Off-White and Louis Vuitton sent messages of safety and love, while models like Karlie Kloss, Winnie Harlow, Stella Maxwell and Joan Smalls, walked a runway from their homes.

A new kind of London Fashion Week has been hold in early June, through a new digital, Men’s and Women’s Platform, where a diverse selection of British brands shared a variety of creative content from podcasts and photo diaries.

Ahead of the rescheduled Paris men’s fashion week, Hermès livestreamed a digital experience tied to its spring 2021 collection. Rather than simply filming looks parading down a catwalk, Hermés chose to capture the backstage scene of a typical fashion show—complete with producers in headsets prodding models to move along and dressers futzing with jackets, getting them to drape just so. Filmed at the brand’s headquarters on the outskirts of Paris and titled “Hors-Champ”, French for off-camera, the video was a collaboration between the designer, Véronique Nichanian, and artistic director Cyril Teste.

In Paris, we also had the first-ever virtual couture fashion week: a  three-day digital event featuring videos and complementary content from major fashion houses that went live on a preset show schedule, emulating the format of a physical fashion week.

Valentino collaborated with Nick Knight to create an immersive, virtual experience to showcase the brand’s new collection. The goal was to “merge the human and digital worlds” and showcase the values of haute couture throw a performance mini-film called “Of Grace and Light”.

In Italy, we just experienced a cyber-focused cyber-focused men’s and women’s fashion show format titled Milano Fashion Week Digital. From panel discussions on social media to virtual showroom appointments, this season’s physical-digital showcase allowed designers to present their latest collection or something totally different. “Everybody can decide their own message. The advantage is that in a digital world, you are completely free. You find your way of expression. We said to everybody, ‘You have from one minute to 15 minutes, and you decide what you want to show,’” Carlo Capasa, the president of the Camera della Moda, told Vogue.

Virtual spectacles and special projects, including Etro’s coed catwalk staged at the Four Seasons Hotel, and Prada’s virtual storytelling (the brand presented five video chapters by international artists, featuring glimpses of the collection against the backdrop of the Fondazione Prada’s exhibition space in Milan) were all shared online during this digital fashion week.

Sunnei made headlines by presenting its Spring/Summer 2021 collection using 3D avatars dancing to the rhythm of Macarena.The show was uploaded to the brand’s IGTV channel and was created using Sunnei’s Canvas, a virtual reality platform that allows for a wide degree of customization. 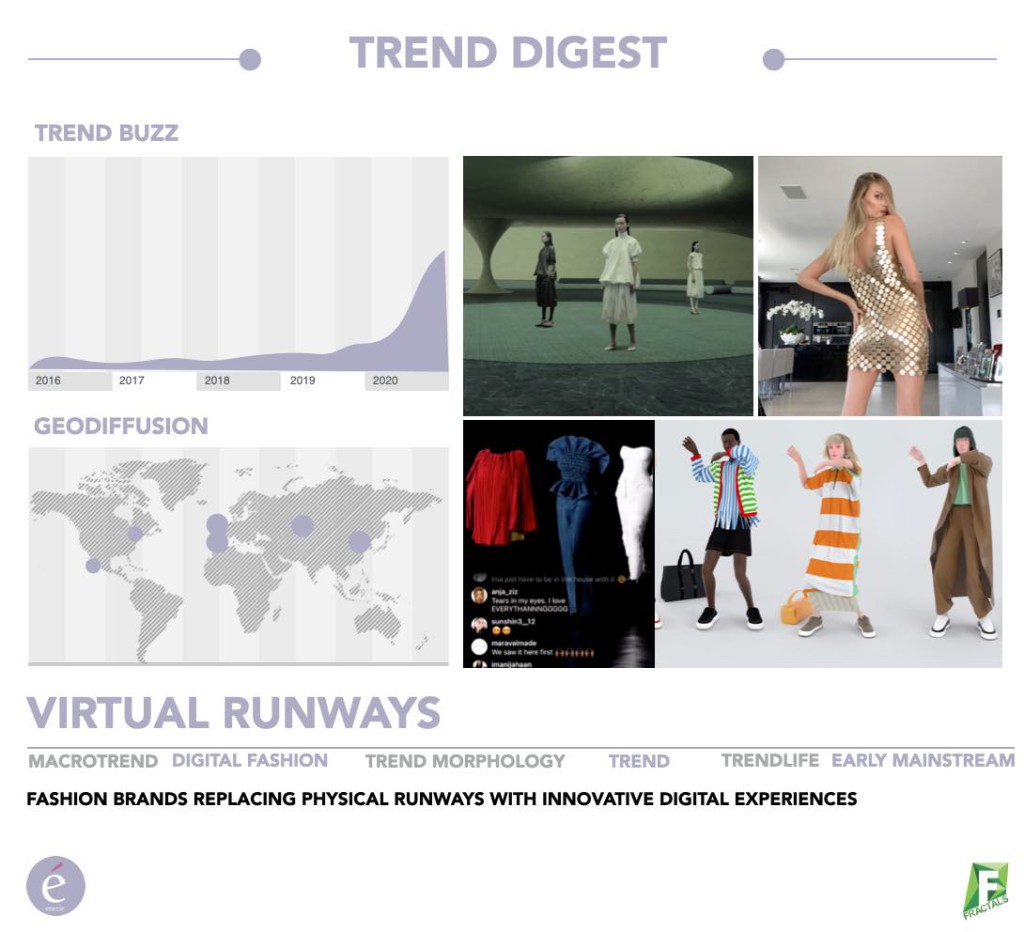 Do you want to know more about this and other fashion trends? Write us at info@fractals.it to ask for a personalized report!